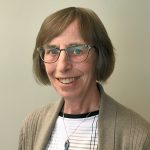 Just about anyone who calls FISA speaks with Magda Hogewoning, first.

Some people might say that she is “just” an executive assistant — and one who will be retiring soon, at that. But FISA executive director Shawn Chisholm doesn’t hold that attitude. “Magda is an incredibly kind and intelligent person. Her calm voice, strong work ethic and knowledge of the independent school sector has served the FISA community very well.” he says.

Former Executive Director Peter Froese agrees. “Magda always maintained the highest level of professional demeanor, and her work was meticulously accurate. I was extremely fortunate to have such a competent and caring person oversee the office.”

And so does the man who originally hired Magda, 10 years ago, Fred Herfst. “When I hired her, I wanted someone who was very precise in what they did and who was committed to doing an excellent job. Magda always had a very, very good work ethic.”

In fact, Fred had been a teacher at the same high school FISA’s receptionist had attended, Fraser Valley Christian — now, Surrey Christian — in her youth. When Fred phoned, Magda had been working in the banking industry for 30 years but had recently taken a buyout rather than endure a corporate move to Toronto.

“He called me up one afternoon in 2009 and asked if I could help FISA out for six months,” she says, noting the job was to  fill in for someone on medical leave. But when the former employee recovered her health, she decided not to return. Magda’s biggest problem? Learning to call her new boss Fred, rather than Mr. Herfst, as she had in high school.

The daughter of Dutch immigrants, Magda says she’s looking forward to retirement. “I’ve been working since I was 18,” she says. “I don’t have to work until I’m 85!” Reflecting back on the last 10 years with FISA she says she’s enjoyed her job and has particular affection for all the people she’s worked with.

One of the highlights she experienced in the last 10 years was attending FISA’s 50th anniversary convention for 5,000 teachers held in 2016. “It was an excellent convention,” she says, “we’re still having teachers asking us, ‘when are you doing it again?’”

As the minute-taker at FISA board meetings Magda has also had the opportunity to meet a wide range of people, including a host of politicians and senior bureaucrats, including premiers, ministers of education and inspectors of independent schools. “I’ve enjoyed all of it,” she says.  “I used to think I hated politics but because of FISA I started to listen and care and I decided that politicians are people too”

She has particular respect for FISA board members, though. “It’s a whole variety of people,” she says. “There’re from different faith-based and non-faith-based groups and you hear them come to consensus, peacefully and politely with caring. It’s a wonderful thing to see.”

Her own experience attending an independent school as a youth, has always informed her work and her whole being. “I’ve never regretted being part of a Christian school community,” she says. “It gave me a strong sense of community that in my case seems to be lasting a lifetime. Not long ago, Magda was going through files and found a document showing who had worked at FISA for the last 50 years. “I love the history,” she says. “Now, I can add my name to that list.” Her last day at FISA will be August 31, 2019.